AIO BOT V2 REVIEW (ANB). DOES THIS ALL IN ONE BOT REALLY WORK? IS IT LEGIT?

AIO Bot V2, also known as ANB AIO, is a good bot to have in your arsenal of bots. But how well does it really work? We’ll tell you that and what else you need to know in this AIO bot review 2019. 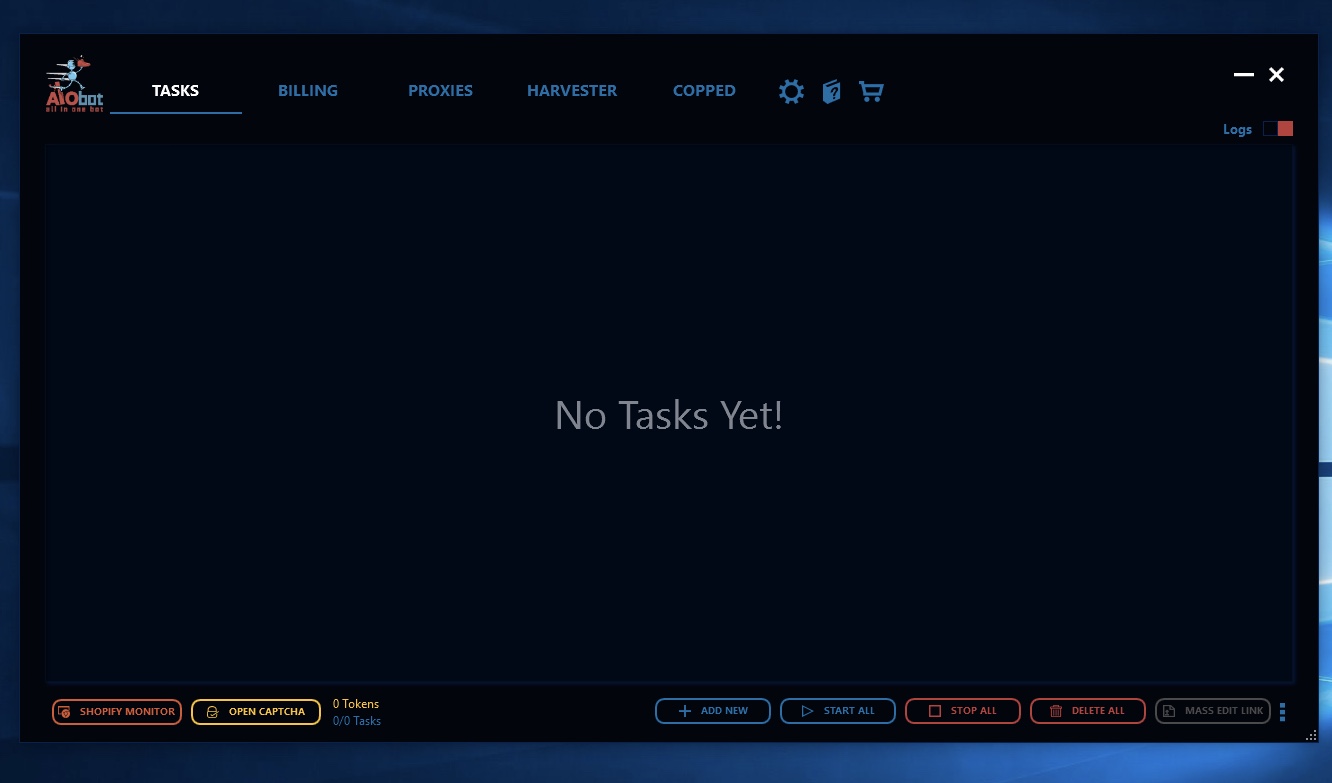 Aio Bot V2 supports 74 sites from shopify, footsites and mesh. It has a lot of users due to it being instock all the time and easy to buy, unlike most other bots that are limited and hard to get for retail.

Its UI (user interface)  is very simple and user friendly, making it easy to set up and run the bot.

AIO bot has been around for a while making it reliable and trustworthy. This bot is particularly good on YeezySupply, Adidas Splash releases and Footsites like foot locker, finish line, ChampsSports and Foot action.

No Captcha can stand in AIO Bot's way! 😏 - Whether if it's Adidas, Footlocker, Off-White or Eastbay AIO Bot has got your back! 💪 - Setup our new captcha solver now for maximum success on upcoming releases! 🔥 - Check out our Youtube page to learn more about the setup! 📹

The best aspect of this All in one bot is definitely its availability to effectiveness ratio. While many AIO bots aren’t available for retail, AIO V2 is always in stock, you can buy directly from them. With other bots you will have to wait for a restock which will be hard to cop or buy from a reseller and is also risky as they could try and scam you.

All you have got to do is got on their website and get instant delivery and easy set up, this bot is very easy to learn how to use.

Despite its constant availability, AIO bot V2 does very well on YeezySupply, Adidas Splash and Footsites. That is mostly thanks to the devs who are very active and push updates regularly to fix any issues or changes in sites.

If you buy that AIO Bot V2, don’t forget to get access to their discord server for release guides, help and a shopify monitor.

Finally, AIO bot v2 or ANB AIO supports proxy and server use. Which is slowly becoming essential for succesful cops.

THE NUMBERS SAY IT ALL 🤫 pic.twitter.com/ahoaC1tcR0

I think it’s better to make it clear at this point AIO bot V2 isn’t the best bot available, but it’s available for retail price which is a great point already.

Among the most annoying points concerning this bot is the user to success ratio is poor, AIO bot V2 has the same success as other bots even though it has significantly more users running every drop.

Due to so many users, the customer care and support is slow and unhelpful most of the time. Which can be troublesome when you want some proxy or server advises. I would strongly advise checking their guides before contacting support.

The bot is not ideal for users outside of USA because it’s strong points are YeezySupply, Footsites and Adidas. It supports different Adidas regions (US, AU and EU) however YeezySupply and Footsites normally only ship to USA and reshipper fees are expensive and not worth it unless its a real limited release like reflective yeezy’s.

It does not support custom shopify sites like most other AIO bots but I am guessing this feature should be added quite soon.

AIO Bot V2 only does well on a few of the sites that it supports and does not normally cook others.Also it does not include Supreme, like an all in one bot should.

Instead they sell Supreme as a stand alone bot on their website.

Renewal is pricey every 6 months and it will most likely burn into profits. Without updates the bot wont work so these update fees cannot be avoided. Proxies and servers are also needed in order to cop multiples. You can cut these costs down by using a google cloud server, you get $300 credit just by signing up so this will last you a while. You can also generate your own proxies and this will only cost $0.007 per hour, per proxy.

You can choose to only run your proxies when needed as well so this can be very cheap. However these proxies are data centre and will not usually work on Adidas and YeezySupply. For these sites you will need residential proxies.

Residential proxies will cost about $0.80-$1 per proxy, per week. For every residential proxy you have is another “entry” into the Adidas Splash page or YeezySupply waiting queue. The more proxies you have, the more likely you are to cop.

I can provide a guide in generating proxies and setting up a google cloud server if needed.

For those not familiar with proxies and servers

A proxy is like a unique IP address which tricks the site into thinking you are multiple people. This comes in handy when sites block multiple requests and when you need to appear as multiple people (for drops on adidas splash for example).

Another use for proxies is to cook multiples. This is because you will need to run a lot of tasks, if all of these tasks are being run from your home ip address there is a high chance that you will get soft banned and take an L. Data centre proxies are a lot quicker but they are a lot more likely to be banned.

Does AIO bot V2 really work? Is it legit?

AIO bot has had over 200,000 checkouts and by looking at their twitter (@ANB_AIO) you can see success their users have. As I mentioned before, their user to success ratio is poor.

This could be due to a lot of new bot users buying the bot because it’s always instock and its very popular. Most people who cook with AIO bot have very good success and cop multiples, this shows with the right set up the bot can be very successful however people who are new to bots will struggle to get this kind of success straight away.

In order to have the “right set up”, you should be using the right proxies, a fast server and have multiple VCC (Virtual credit cards) with jigged addresses. This will take your botting to the next level. I will go into more detail about this in another guide.

Without Supreme, it’s not a real All In One Bot

My conclusion from this AIO bot review is that it’s a good bot to have if you can afford to run it properly, however it should not be bought as your main bot due to it only really cooking 3 sites consistently.

AIO V2 does not support Supreme either which is arguably one of the most crucial sites an AIO bot should support. As the whole point is its an “All in one bot” and you shouldn’t need to buy another bot so this defeats the point of it being an AIO BOT.  Because of the high renewal fees every 6 months and the initial cost I would say this bot is overpriced and you can get better bots for this price.

Want to buy AIO V2 at the best price on the market? Get 10% off using the code botsthatwork at checkout

However if you are from America, have experience using bots and regularly go for releases on Adidas, YeezySupply and footsites this bot could be profitable for you.

I believe many people go wrong by buying this as their first bot and being overwhelmed with the high maintenance costs and as they don’t know how to run the bot properly they don’t make money back.

Author
Toby has been botting since Chrome extensions were the way to go. This American sneakerhead knows botting like the back of his hand. You'll see him all over our Discord server.